Hallstatt – a small village of around eight hundred inhabitants somewhere in the Upper Austria that you’re always being told about and never really get to go there. I actually did, pretty spontaneously and I don’t regret anything.

After a four hour bus ride from Vienna we woke up next to a calm lake surrounded by tremendous mountains. Exactly these mountains used to make it so hard for the inhabitants to move around the village and for anybody to come to Hallstatt – until a road was built at the end of the 19th century. If there was only a little space between them and the lake, why did people want to live there? The answer is pretty easy: salt. The white gold that helped people in the pre-fridge times preserve food and therefore was very valuable could be found here.

So people mined the precious mineral and had to take it down to the village – a job that often didn’t even bring them enough money to feed their families. That’s why they worked even more. The women had to leave their babies for the time they were working at home and often didn’t have anybody to watch out for them. A tough problem with a relatively easy, however disastrous solution: they dipped the tip of their skirt in schnapps and gave it to the little ones. The babies got drunk, so they were sleeping the whole day long and their mothers didn’t have to worry about them; until later, when they had health problems.

To remember these women there is a plaque next to the bench where they used to rest on their way down.

In the Parish of the Assumption there are two altars right next to each other. The first one was made by a local artist between 1510 and 1520 – this late gothic masterpiece was found almost three centuries later out-of-date, so the parishioners convinced the bishop to order a new one. That’s how the new altar, this time in the new gothic style appeared in the church. The last one stayed right next to it, because it would have cost too much money to get it out. 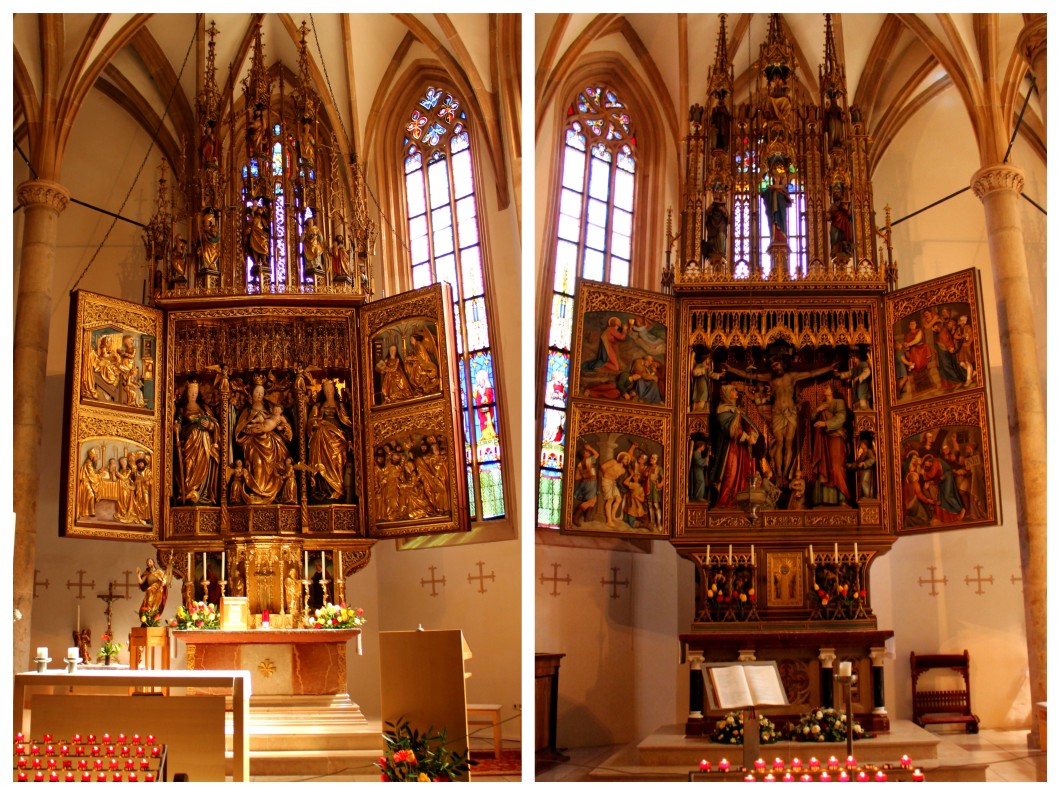 Actually to me the story about the cemetery around the church is more interesting than the church itself. As there wasn’t too much space for the graves, the people of Hallstatt had to think pretty soon about an alternative: that’s why about 10 to 15 years after the funeral they took the skull and the long bones out of the grave to make room for the next body. Then the skull would be cleaned and put in the sun and  in the moonlight for a couple of weeks. At the beginning of the 18th century a new tradition was born – as it wasn’t possible to put flowers in the bone house people started decorating the skulls. They wrote the name, the date of birth and the date of death and painted wreaths, crosses, flowers and leafs on it. Apparently these skulls should have protected them from diseases and evil spirits.

Today there are about 1200 skulls in the Hallstatt Bone House (as well called Ossuarium) and the last person buried this way was a woman that died in 1983. Your bones can actually as well rest there if you want to – you just have to write it in your testament. Isn’t it great to keep your identity even when all that’s left after your death is your skull?

Hallstatt is truly a picturesque village that is simply perfect to stroll. You feel as if you had time travelled and even though there are relatively many tourists you don’t mind it too much; maybe only when you look at some prices and when you want to take a round trip by boat (by the way: watch out for the round trip times, we’ve missed it and there was no next one). 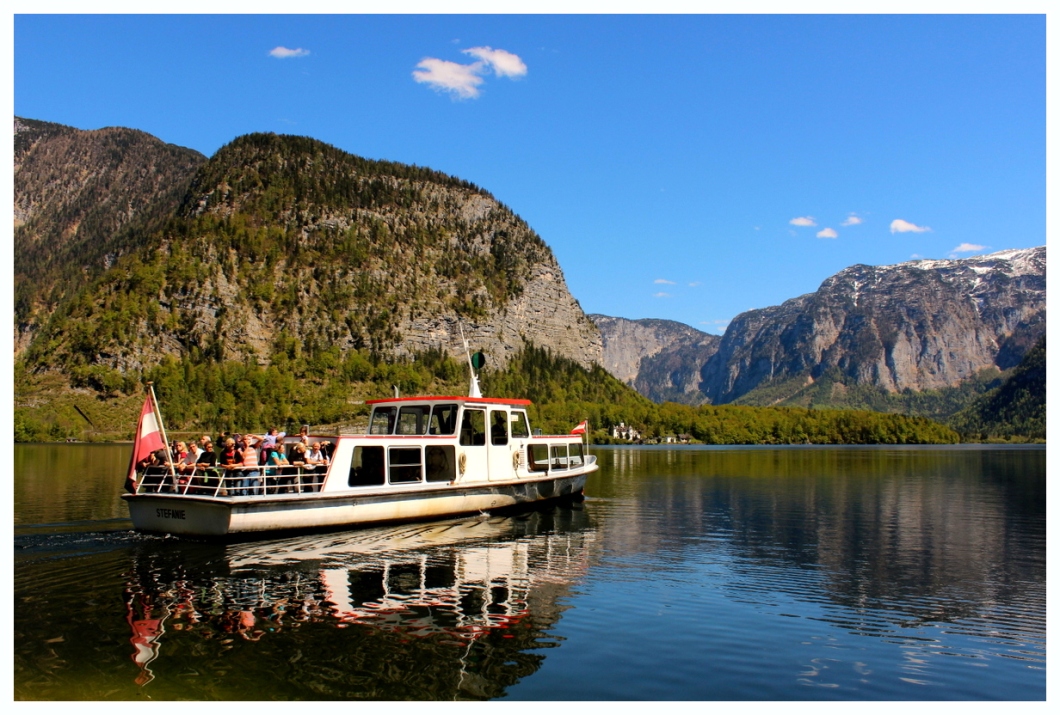 By a boat you can go to the other side of the lake as well where a white castle stands. One of his owners died in 1668 and was probably a type of person that wants to annoy other people even after his death. His last will was namely that every fifty years on the anniversary of his death his coffin should be taken out of the tomb, carried around the church and transported over the lake to his castle. Yes. Yes, he wrote that down in his testament.

Surprisingly it was actually done then a couple of times, most likely because he has funded a tomb chapel to the church. We all know that: usually when no one knows why somebody did something, it’s probably because of money.

So why visit Hallstatt? Mostly because of the breath taking nature and old, gorgeous architecture. It’s a small village with not so many small alleys and a main street that could handle maybe one car at a time. With creepy stories hidden behind the normal-looking facades. With picturesque houses and cute decorations on them. With a church of two altars, because people didn’t like the old one, yet didn’t want to pay for getting rid of it. With a bone house full of painted skulls. With the mountains, the sun and the clouds reflecting in the clear surface of the Hallstatt lake.

A perfect getaway for a day or two of strolling, chilling in the sun (if you’re lucky enough) and, most probably, eating. Anything you will do will be with a great view, so charge your camera’s batteries! Beautiful photos are awaiting you.

How to get there?

Funnily, the journey from Salzburg by train takes only one hour less than from Vienna and costs 27,60 € or you can take a bus to Bad Ischl for 10,50 € and from there get on the train for 4,40 €. The distance for the drivers amounts 85 km.

*These are the current times and prices which can change any time, so before you plan check it. The distances however shouldn’t change.