Bologna – a city you know probably mostly because of your history lessons, friends that study or have studied there or, if you’re familiar with Austrian culture, a song by Wanda. Today is a perfect day to change it! La Rossa or the Red City, as they call it because of the terracotta roofs, is not only gorgeous, but also full of amazing stories and mouth-watering food. Proof? As I told an Italian friend of mine that I was going to Bologna, his answer was rather short: “Oh, you’re gonna eat good.”

He was right. It is definitely not a destination for people on a diet.

This gem lays in the Emilia-Romagna region. It´s between some very strong tourist magnets like Florence, Venice and Milan; hence, many travelers seem to oversee it. This has been changing in the last few years leaving its impact on the city (e.g. making the main street, Via Ugo Bassi, into a pedestrian zone), but it’s still not that touristy nor monumental; it’s mostly a nice university town in which everything is within a walking distance. 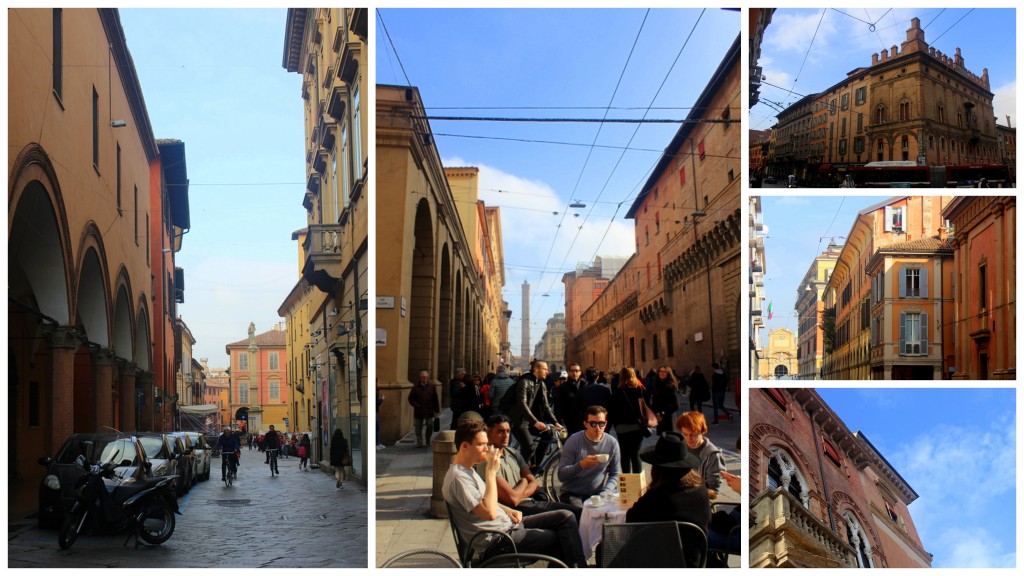 Walking is indeed the best way to explore Bologna, regardless of the weather. The sidewalks go usually under porticos or arcades that were built in the Middle Ages to house all the wannabe students coming to the city. Just like today, all of them wanted to live in the center, so instead of building new houses, the existing ones were expanded over the sidewalks. The first ones were just a meter or two; with time, the expansions got bigger and bigger and needed a column to support them. Then, they became a compulsory part of the new building code. That’s how the famous portici di Bologna were born. Nowadays, the remaining 40 km of them still protect the walking enthusiasts from both rain and sun, even to the top of the neighboring hill!

Bologna used to be famous for one more thing: towers. In fact, it looked like today’s Hong Kong or New York: there were around 100 towers overlooking the city! The Middle Ages were the time when rich Bolognese families invested their wealth into such tall structures to show off and protect their properties. Today, there are only 22; the rest collapsed or were demolished. If you’re just like me curious what Medieval skyscrapers looked like, here you can find not only more comprehensive information, but also some pictures.

The most prominent of the survivors are the Asinelli and Garisenda Towers, or “Two Towers” if you will. Apparently leaning towers are especially beloved in Italy, as they got chosen to be the symbol of Bologna just like the Leaning Tower is the symbol of Pisa. They were built in the beginning of the 12th century and their construction was a result of an argument between two families about which was the wealthier one; looking at the 97-meter-tall Asinelli and only 48-meter-tall Garisenda tower I think we all know who won.

It is possible and encouraged (by me) to go up the taller one. The Asinelli Tower had a long and rich history – after helping its owners win a bet, it was used as a prison, a stronghold, a scientific laboratory and a sight post. It also survived at least two fires and allegedly even inspired the architect of the World Trade Center. Think about all that as you climb the 498 steps up; you’ll not only have something to do to kill the time, but also become more confident that neither these old wooden steps nor the tower itself will collapse while you’re on top. This tower has gone through a lot! It may be tiring and scary to go all the way up, but I can assure you it’s worth it. Even though it got foggy right before I got my ticket to go up, I could still enjoy an 360° panorama of the city. Breathtaking!

The easiest to spot from up there is Piazza Maggiore – the main square. It was created in the 13th century when high officials of Bologna decided to demolish some houses and churches to free up space for a complex of palaces we can still admire today, mostly for administrative purposes. What really surprised me was Palazzo del Podestà located on the northern side of the plaza. Built as the seat of the city government and used in the meantime as a theatre and a football hall, today it houses mostly cafés, bars, restaurants, the tourist information and some kind of magic. Its tower is supported by four corner pillars that were constructed with such knowledge and precision that they let anyone standing in one of them and basically talking to the wall be heard by another person standing in the opposite corner. No need for shouting, a whisper is enough. The architect created this acoustic effect (“telefono senza fili”, or wireless phone) to let the monks confess the lepers without putting their own health at risk. 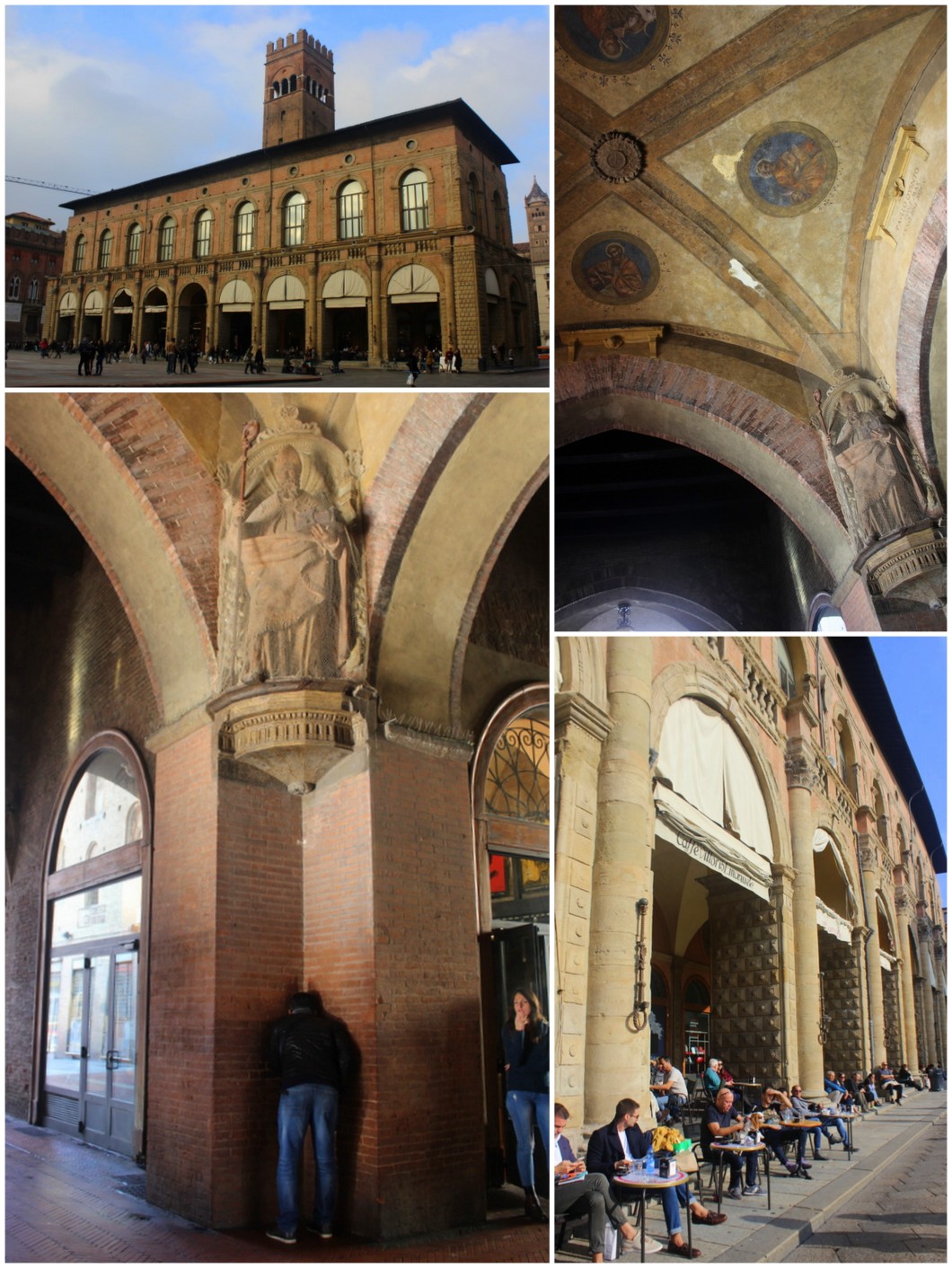 Nevertheless, the most prominent building is the Basilica di San Petronio. As most of today’s tourist attractions in the city, it also has a crazy story behind it: it was meant to be the biggest church of the world, overtopping even St Peter’s Basilica in Rome! Of course, the Pope couldn’t let this happen and the funds for the construction were transferred to the university. It wasn’t too bad, as they were then invested into the Archiginnasio, but left the Basilica in the state of incompletion forever. The most obvious sign of that is the façade – only the lower half is covered with marble.

Just next to the entrance, you’ll find a long line nobody is allowed to step onto. It’s the St Petronius Meridian which indicates the date. I was once again impressed by the precision of the Bolognese calculations: the line is exactly 67.72 meters long which corresponds to the 600000th part of the Earth’s meridian and based on where the sun shines through a hole in the roof, one can say what day of the year it is. How amazing is that?

Also, maybe the Basilica isn’t the biggest one on this planet, but it does hold two world records: the meridian we’ve just discussed is the longest one and the 15th-century organs located in the Musical Chapel are the oldest functioning organs. 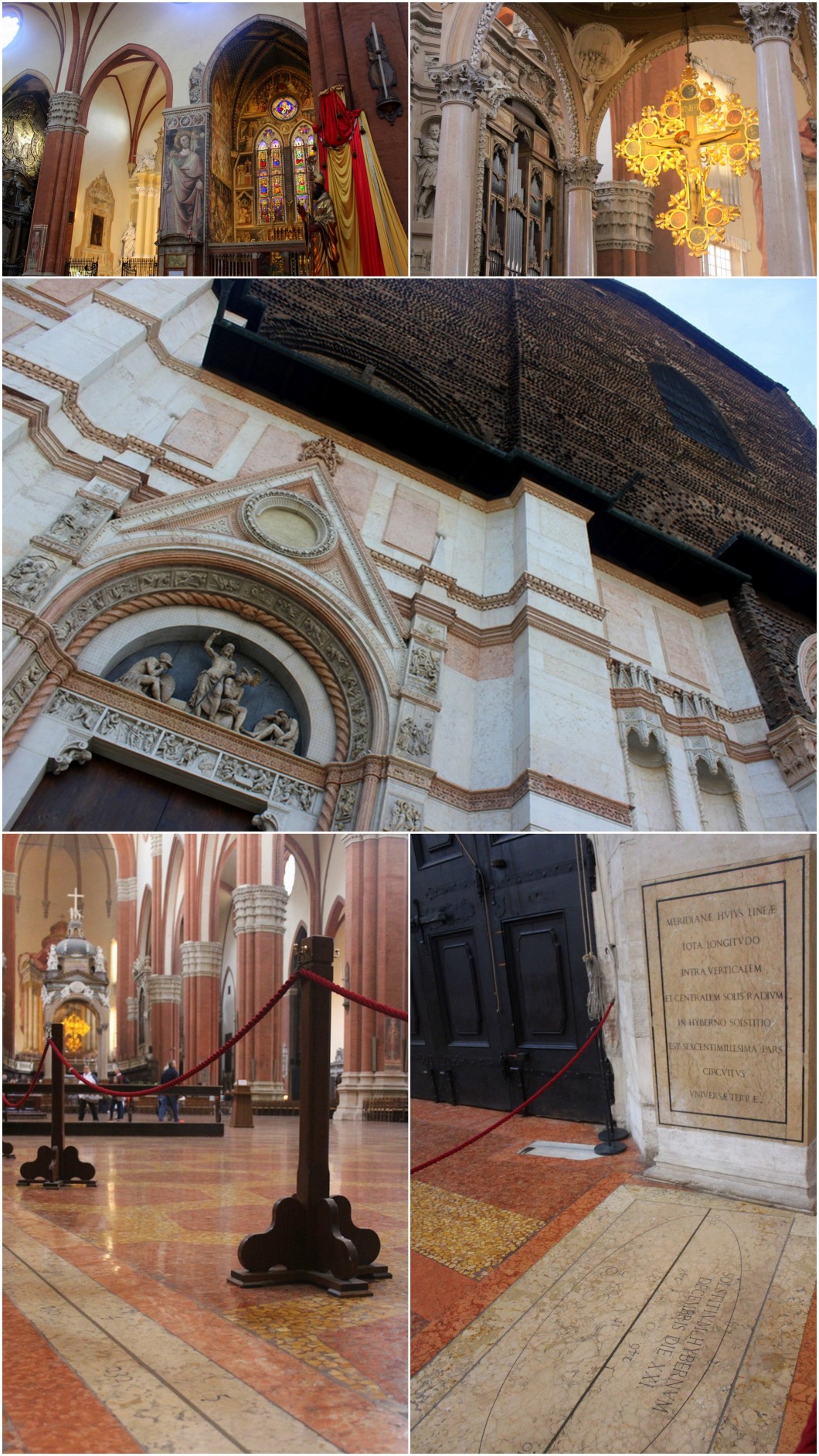 Being back on Piazza Maggiore, it’s essential not to miss Piazza Nettuno. It’s a smaller plaza that forms an “L” shape together with the main square and, to be honest, looks like a part of it. Take a look at the famous Neptune Fountain and, if you’re there at night, at its shadow projecting on the Palazzo d’Accursio. On the same wall you´ll find seemingly random lines: they were the point of reference for the measurement of textil and other goods sold on the market.

Another lovely square is the Piazza Santo Stefano. Its shape reminds me of a pizza slice: its long sides are decorated with porticos and there is a religious complex on the shorter side. Just looking at it, it’s not easy to guess the number of the interconnected churches. Many swear they can see seven of them, while there are only… three. Maths questions apart, it’s a beautiful, peaceful square with quite an intimate atmosphere in the evening. Don’t miss it!

A short walk away is the already mentioned Archiginnasio. The University of Bologna was founded as the first one in the Western world in 1088, but it had no own building; the classes were held in various houses, churches and even on the squares. It changed with the construction of the Archiginnasio (1562-1563) which turned into the first seat of this prestigious institution. Of course, only the richest had the possibility to study there and put their name and their family or country coat of arms on the wall. There were also inscriptions and monuments of the professors and other memoirs painted. Nowadays, the passageways are decorated with an impressive multitude of beautiful frescos that once were objects of pride to many – again, holding a world record. It’s the largest collection of heraldic wall adornment.

So, what did all these people study? Generally, either Law or Arts, whereby the latter was quite a loose term. It included subjects like philosophy and literature, but also others, that we wouldn’t necessarily associate with art today like medicine and mathematics.

Therefore, the name of the Teatro Anatomico makes an unexpected link between what was understood as Arts back then and an example of how we would define it today. That’s where anatomy lectures were held, and the first corpses were dissected for scientific purposes. Even though it’s decorated in a different style than the rest of the building, it doesn’t mean it’s not impressive – it’s a room all covered in cedar-wood with a marble table in the middle where the body used to lay.

If you’d like to see more of art and history, there are more than fifty museums in Bologna.

Do you remember there’s a portico leading up a hill? It’s actually the longest one in the world (3,796 km, 666 arches). It provides shelter not only for tourists that long for great architecture and spectacular views over the city, but also for the yearly Ascension Week’s procession during which the miraculous icon of the Virgin Mary was paraded between the city’s cathedral and Santuario Di San Luca. On the way, there are 15 Mysteries, or chapels that narrate the life of the Virgin. Unfortunately, I ran out of time to go all the way up, but I managed to reach the 3rd Mystery and at least got an idea of what the longest portico in the world looks like. Not bad, huh? 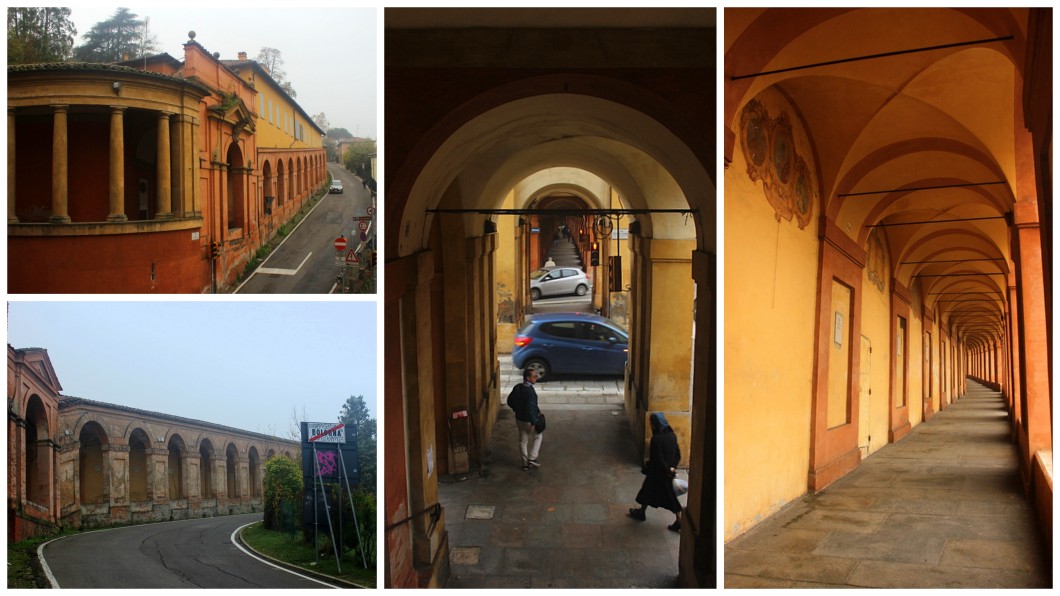 Last but not least: do you like mysteries? Then, take a look at the seven secrets of Bologna and try to spot them yourself when you visit!

Emilia-Romagna is probably the richest food region I’ve ever visited and it seems impossible to make a short list of its treasures… As this post is already long, I´ve uploaded an extra post with my choice of food you can´t miss while in Bologna.