There are many things that can be considered symbols of Vienna, but one of the main ones is definitely the waltz and these fabulous parties where it is danced. The tradition of the classic Viennese balls goes back over four centuries and is still very much alive – every year more than 450 of them take place.

That makes max. two balls a day, right? Wrong. The ball season doesn’t last the whole year, so there are often several balls happening on one evening. The season starts officially on the 11th of November at 11:11 when people meet in the city center to dance waltz and quadrille on the street with complete strangers. It’s usually quite cold by then already, but nobody seems to care.

The most balls take place in January and February and light up these cold and dark months when it’s hard to find joy: the Christmas markets are gone and there’s a lot of time left till one actually enjoys leaving home again. Instead of being depressed and waiting for spring to come, the Viennese prepare their fancy outfits, spend a wonderful evening and reminisce about it for some time.

And then they do it again.

Until Shrove Tuesday comes, and the season is over.

As it’s such an important part of this culture, attending a Viennese ball has been my dream ever since I moved here. That’s why when my friends and I decided to go to the Vienna Ball of Sciences, I was more than excited. The moment I bought the ticket, the preparations began: I decided on the dress and shoes, bought a scarf, decided that that dress wasn’t good enough, bought another one, got also a bag and earrings and ended up going with another bag and wearing other earrings. Of course, the looks are not enough, so I met a couple of times with a friend of mine and her dancing friends that taught me the basic steps of some ballroom dances. I also asked her a million questions about the event itself, so I felt quite prepared for what was coming.

We arrived at the ball right before the official opening. We went through the courtyards and up the impressive staircases of the city hall, changed our shoes, left our coats and extra luggage in the cloakroom and headed to the main ballroom. The event started with a long speech, some compositions played by the orchestra and, of course, a dance.

The polonaise and waltz were performed by girls in white dresses and gloves and boys in black elegant clothing, who had to meet the requirements of being between 17 and 25 years old, signing up through his/her dance school, showing the committee his/her dancing skills, taking part in the rehearsals and following the strict dress code. One may ask: why do they go through all of it just for one dance? In the end, if you can dance, it’s not hard to get in; you get to go with your friends to the event for free or with a significant discount, you enjoy yourself and some even consider opening balls as an activity that is part of being Viennese.

As soon as the first notes of the waltz filled the room, the young dancers were flying majestically over the dancefloor. It was a truly charming sight and what amazed me even more was that the other guests could join them soon. Of course, I was one of them. It got very crowded, what made dancing a bit challenging, but I regret nothing – I danced the first waltz of the night and it was beautiful.

At midnight and at 2 am it was the time of the quadrille, so people formed a couple of rows from which two always had to face each other. This dance is performed by four couples that stand in a square and follow the instructions of an outsider that explains what to do as they go. In the beginning, it is very elegant and quite easy to learn; nevertheless, the music gets faster and faster and everybody ends up speeding and laughing. The quadrille finishes with all the couples galloping through the room.

The ball itself was great and passed way too fast. We danced waltz, cha-cha-cha, quickstep, samba, tango, jive and even our own inventions on various dancefloors – from the main ballroom through the tango bar all the way down to the disco. Apart from the main orchestra, there were many live concerts and one could decide which music he was feeling like listening the most. When we wanted to rest, we would sit on one of the coaches or on the chairs; when we wanted to go for a walk, there were enough stunning staircases and beautiful rooms to discover. I also learned a lot about the differences between a tuxedo and a tailcoat (which are by the way the preferred outfits for men; a black suit is okay, too). 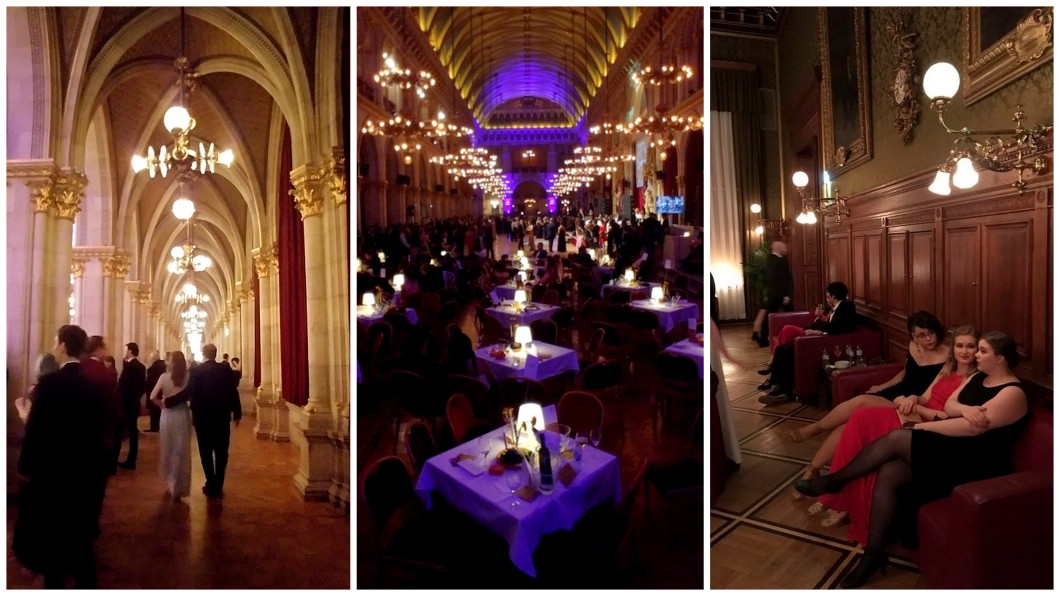 What really surprised me was that the main snack served that night was… sausages (Sacherwürstel). Yes, they are thin, very long and allegedly of better quality than the classic frankfurters, but let’s be honest, it doesn’t change much. Yes, it’s tradition, but I just don’t get how one decided that sausages served with mustard, horseradish and a bread roll go with ball gowns and tailcoats. It also shocked me that they were being cooked right there in one of the corridors, what led to the smell of sausages spreading through the impressive staircase, going hand in hand with the guests in fancy outfits parading up and down the red carpet. Very Viennese combination, I guess.

All in all, my very first Viennese ball was magical. It is truly a totally different way of spending time, especially if you’re a student and are used to more laid-back events. Not only did I have a lot of fun, finally experience one of the events that are so essential to the Viennese culture and feel very classy, I also met per coincidence many people I knew, what gave me a feeling of belonging.

And belonging to something this beautiful in the city I chose to call my home is simply another level of happiness – a level on which you don’t mind even the smell of cooked sausages.